Events
Calendar of Events
Add new
Saturday February 15 - 07:00 pm
Come Together to raise funds in support of China, Australia and Philippines
Eve Banquet Hall
Mississauga 6380 Norhwest Drive
Come Together is a fundraising event with the goal to raise critical funds needed for three countries that are facing the world’s most difficult calamities to date. This includes: The Philippine Red Cross in the Philippines, Gawad Kalinga 777 in Australia, and the Central Hospital of Wuhan, in China.

In the city of Batangas, Philippines, tens of thousands of people have been evacuated after Taal volcano began spewing ash on January 12, and lava in the early hours of January 13. Almost 25,000 people are now in more than 120 evacuation centres. More than 450,000 people live within the 14-kilometre danger zone.
The Philippine Red Cross has been providing services and emergency items to people in evacuation centres through deploying ambulances, giving out dust masks, providing hot meals, water, sanitation and hygiene items, and offering emotional support and child-friendly spaces.

In Australia, after they experienced several months of wildfires that have devastated the country, there are new causes for concern including: torrential downpours, cyclones and flash flooding. Over 18 million hectares have burned in the Australian bushfire season 2019–2020, by mid-January destroyed over 5,900 buildings, and over 2,800 homes. In addition to human fatalities, many millions of animals are reported to have been killed bringing 113 species closer to extinction. Please join us in giving back to support Gawad Kalinga 777 who will assist with disaster relief.

In Wuhan, China, the new year began with reports of a rapidly growing onset of a respiratory illness called 2019 Novel Coronavirus (2019-nCov). The World Health Organization has classified the outbreak as a global health emergency, and governments around the world are taking action to control the virus from spreading. Funds that are being raised go directly to the Central Hospital of Wuhan. The money raised will be used to purchase much-needed medical supplies and provide assistance to individuals, families, and communities in need.

Join us on February 15, 2020 at Eve Banquet Hall (6380 Northwest Drive, Mississauga) at 7PM. Cocktails and finger foods will be served. Each ticket is $30, with 50% going to the organization of your choice. There will be silent auctions, music, and dancing.
(PRESS RELEASE) 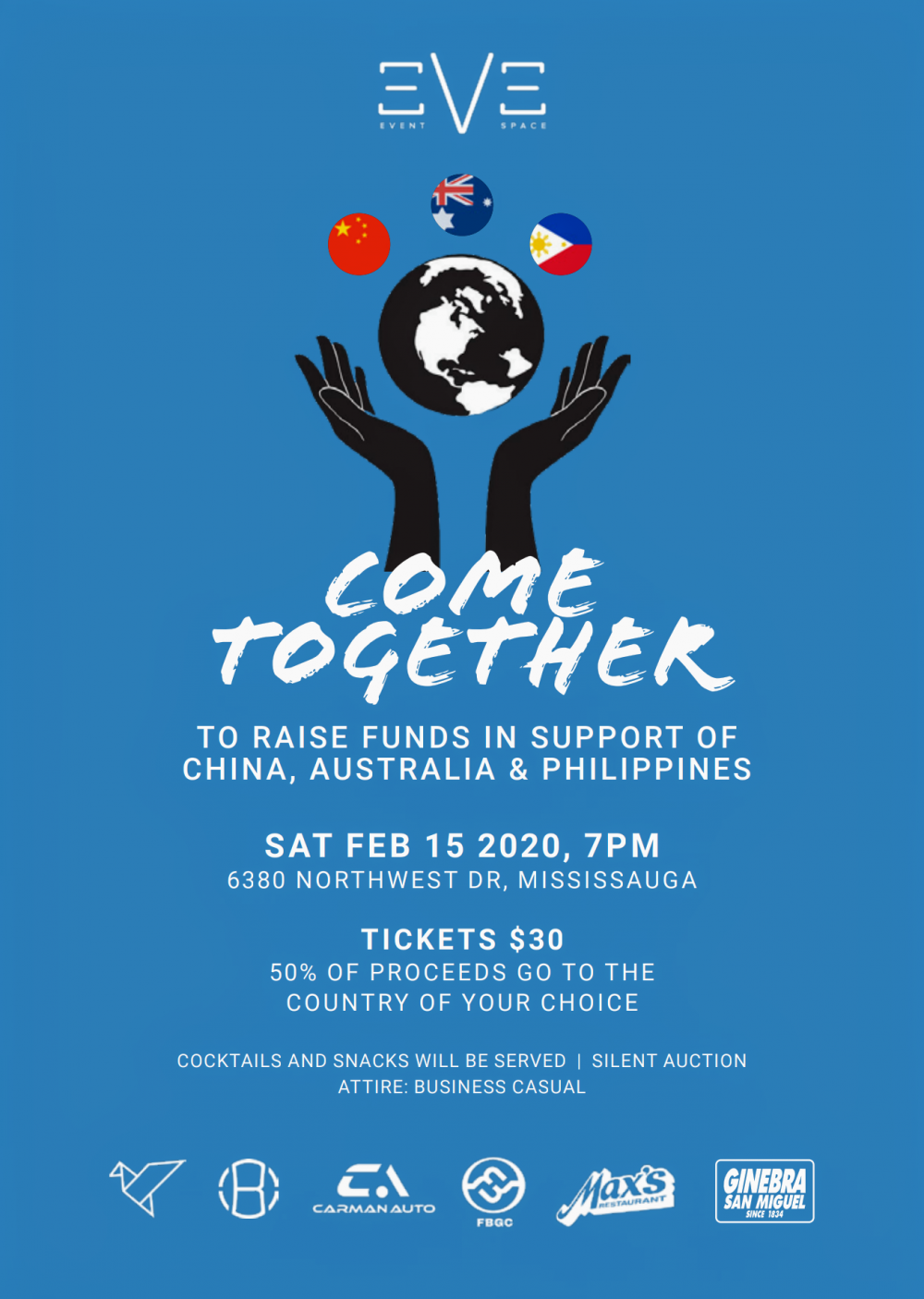