Pope Francis celebrates a Filipino Christmas tradition at the Vatican

Pope Francis celebrates a Filipino Christmas tradition at the Vatican 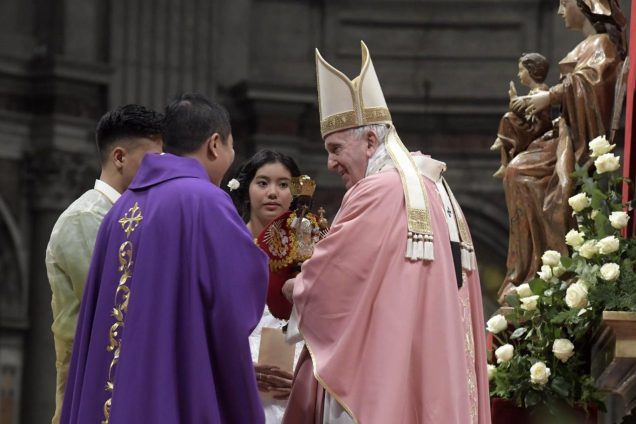 “In the Philippines, for centuries, there has been a novena in preparation for Christmas called Simbang Gabi, ‘Mass of the night’. During nine days the Filipino faithful gather at dawn in their parishes for a special Eucharistic celebration,” Pope Francis said Dec. 15.

“Through this celebration we want to prepare ourselves for Christmas according to the spirit of the Word of God that we have listened to, remaining constant until the Lord’s definitive coming,” he said in his homily for the Mass in St. Peter’s Basilica.

Pope Francis invited Rome’s Filipino community to celebrate Gaudete Sunday Mass at the Vatican in honor of the first day of the traditional novena. It is the first time that a pope has celebrated Simbang Gabi at the Vatican.

The Simbang Gabi tradition in the Philippines dates back to the 17th century. Filipinos hang a star outside their homes, and attend early morning Masses on each of the nine days before Christmas.

“In recent decades, thanks to Filipino migrants, this devotion has crossed national borders and has arrived in many other countries. Simbang-Gabi has also been celebrated in the diocese of Rome for years, and today we celebrate it together here, in St. Peter’s Basilica,” Pope Francis said.

The pope told the Filipino community gathered in St. Peter’s Basilica that they are called to be “leaven” in their parish communities in Italy, and encouraged them to share their “cultural and spiritual wealth.”

There are over 167,000 Filipinos residing in Italy, according to the Italian Ministry of Labor. Fr. Ricky Gente, chaplain for the Filipino community in Rome, address Pope Francis following the Mass:

“Almost 500 years ago, European missionaries planted the seed of faith in our beloved Philippines. We are happy and blessed because after five centuries we are here in Europe and throughout the world transmitting the joy and beauty of the Gospel,” Fr. Gente said.

“Before the celebration of the last World Day of Migrants and Refugees, the Holy Father shared with me that Filipino women are ‘smugglers of the faith,’” the priest said.

“Yes, it is true, we carry with us everywhere we go the torch of faith and of the Gospel in the world, the same faith and Gospel that have been transmitted to us. This is why today, here in front of you, you find a happy and smiling people because the flame of faith continues to burn intensely in our hearts,” he added.

The Filipino community gave Pope Francis a traditional Marian statue as an early birthday gift. The pope will celebrate his 83rd birthday on Dec. 17. Pope Francis responded after receiving the gift: “Be smugglers of the faith.”

“We are all invited to build together that communion in diversity that constitutes a distinctive trait of the Kingdom of God, inaugurated by Jesus Christ, Son of God made man,” the pope said in his homily. “We are all called to proclaim the Gospel together, the Good News of salvation, in all languages, so as to reach as many people as possible.”

“To adequately prepare ourselves for this new outpouring of grace, the Church offers us the time of Advent, in which we are called to reawaken in our hearts the expectation and to intensify our prayer,” Francis said.

“May the Holy Child that we are preparing to worship, wrapped in poor swaddling clothes and lying in a manger, bless you and give you the strength to carry on your testimony with joy,” Pope Francis said.